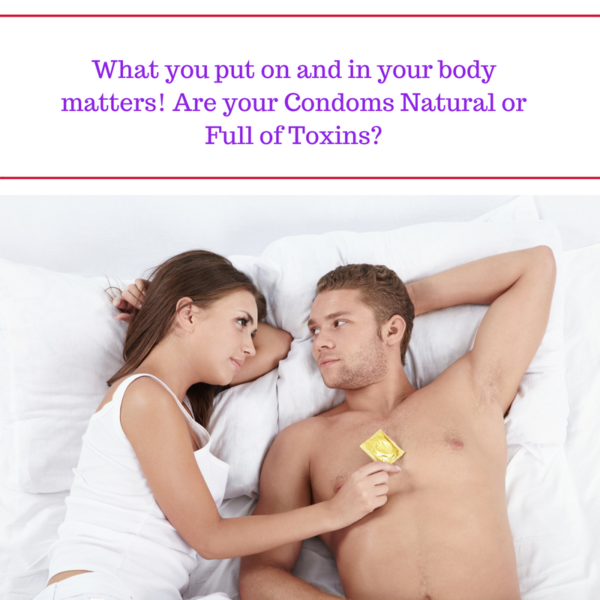 What’s in your condoms?

Many people are aware that what they put in their mouths and on their skin matters. When we put things that have BPA, PVC, phthalates, pesticides and other toxins that are allowed in our every day products and in our food into our bodies, these toxins are later found in the bloodstream and have lasting effects, including that of cancer, allergies and reproductive harm. Yet, how many people stop to think about putting these same chemicals into his/her body via ‘down below?’ We know the toxic effects that tampons can have, but what about condoms?

Most condom brands contain parabens (linked to cancer, they are endocrine disruptors and they can interact with normal hormonal processes), spermicides (linked to inflammation in the cervix and vagina and can actually increase a person’s HIV risk), polyurethane, glycerin (encourages yeast infections), acetate (drying to the vaginal cell wall in creasing chance of disease transmission), dairy protein casein (an issue for our vegan friends), lidocaine and benzocaine (for which the FDA says, “When skin temperature increases, the amount of anesthetic reaching the blood stream is unpredictable and the risk of life-threatening side effects increases with greater amounts of lidocaine in the blood”).

There are safe condom alternatives

(that are also vegan friendly for those who care about that!)

Sir Richard’s is made from natural latex from the rubber tree. Latex in its pure form is a natural, renewable resource coming from the rubber tree. However, most condom companies add all sorts of chemicals during the manufacturing process.  People who claim to have a latex allergy could very likely just be having a reaction to the chemicals within the latex. Sir Richard’s Condom Company is the leading manufacturer of premium condoms that are free of harmful chemicals (parabens, spermicide, or glycerin) and PETA-approved and Vegan-certified. The same brand does not include the dairy protein casein. This means that their condoms can be vegan and animal friendly. These are made in the USA. No toxic chemicals used.

GLYDE produces flavored condoms that are made with “organic food-grade extracts — no fake chemicals or sugars added.” They are a certified ethical, vegan & fair trade premium condom brand. Like Sir Richards, their condoms are made from natural rubber without added chemicals.

Since we’re here – you, know in a pretty taboo conversation, why not explore lubes?

Lubricants sold for the purposes of using them in the private region, often contain toxic chemicals that shouldn’t be on your skin, much less inside of a woman’s body. For instance, here’s the ingredients found in K-Y Jelly: water, glycerin, hydroxyethylcellulose, chlorhexidine gluconate, gluconolactone, methylparaben, and sodium hydroxide. Some of these chemicals, including chlorhexidine gluconate, kills all of the healthy vaginal bacteria. No thanks….

What are safe lubricants?

Truth be told, my husband and I have been using coconut or olive oil for years. It’s simple and clean, without anything added that could contribute to yeast, cancers or STDS (that can enter the body more freely when the wall of the vagina is dry and depleted of good bacteria) BUT we do not use condoms. For eight years we have used the natural family planning method with great success. Oils can break down the material of a condom (more specifically natural latex ones), so for that reason, I cannot recommend using these with one.

For those who do use condoms, it is hard to find something 100% natural that will not break down the condom. Here are the better options that I found:

On that note, happy and healthy condom using!