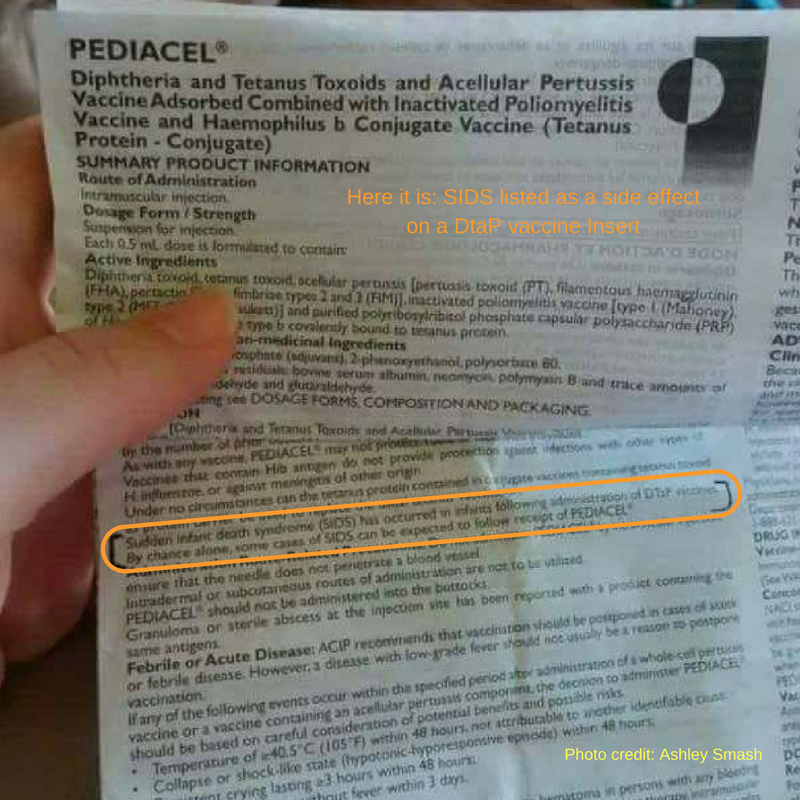 SIDS is the term given to all of the babies who die of an unexplainable death before they turn one year old.

SIDS and the DTaP Vaccine

“70% of children who have died of SIDS received the pertussis vaccine within 3 weeks before death.”  Within this 3 week time period after receiving the vaccine, children’s breathing patterns became stress-induced, wreaking havoc on their respiratory systems (Pages 120 and 121 of Vaccine Safety Manual For Concerned Families and Health Practitioners). This stressed induced breathing, combined with a baby sleeping face down would seem to make it even more troublesome for him/her to breathe freely. This is the very same vaccine that lists SIDS as a possible side effect. Something to think about (at the very least).

Please note, the CDC is changing their inserts over the last year, leaving out important side effects even though they are very much still side effects.

Any infant death that is ‘unexplainable’ gets lumped into the term SIDS. I believe much of it has to do with a toxic overload. Here’s some more information on that: Protecting Your Baby From SIDS

Statement from the World Health Organization on Vaccines

On January 18, 2020, after meeting to discuss vaccines at the Global Vaccine Safety Summit, the World Health Organization came out with a statement acknowledging that they are questioning the safety of vaccines. The live feed is pretty eye-opening.

As far as the childhood vaccination program, Robert F. Kennedy has been studying the ingredients and the program itself, for years. “These guys at the CDC originally were telling me ‘well, there’s a good mercury and a bad mercury,’” Kennedy said. “I knew at that point, their argument was not with me, it was with the periodic table, because there’s no way that could happen.”

Kennedy said according to well-known vaccine proponent and rotavirus vaccine developer Paul Offit, who he spoke with by phone, ethyl mercury leaves the body so fast that it doesn’t have time to do damage. However, Kennedy said that he had read Thomas Burbacher’s monkey studies which confirmed that although ethyl mercury does clear the blood quickly, it goes directly into the brain, where it rapidly metabolizes into highly toxic inorganic mercury, and then lodges there, creating inflammation and brain damage.

You can read everything he said here: The Iowa Standard

If you find this post useful please share it with others so that they can start doing their own research.