“My best friend’s sister in law is/was exclusively breastfeeding her 6 week old. Today she comes over the house and makes a bottle of formula.  She said that she is working on weaning, as suggested by her pediatrician, because she’s not a healthy eater and she misses drinking coffee. He also told her that there isn’t a big difference between formula and breast milk anyway.”

Why was I expecting these types of comments? Because of the statements recently made by the Weston A. Price Foundation regarding breastfeeding, and the perfect diet that a nursing mother should have, says them.

Perfect. Perfect, much like the word natural, is one of those words that has a broad range of interpretations.

Below, copied and pasted directly from their website, is the ‘perfect‘ (and only) diet for a nursing mother to have, according to the Weston A. Price Foundation (WAPF). *** Please see the bottom of the bottom of the post for the WAPF exact statement.

DIET FOR PREGNANT AND NURSING MOTHERS (for a list of avoids and a warning, click the link)

I understand the importance of the nutrients offered in the WAPF diet and I think that having a set of food suggestions for women to use as a guideline while nursing is a good idea. However, while I believe that a nursing mother should be eating a healthy, well balanced diet, I in no way think that if she isn’t eating according to this ‘perfect’ list, that she should not nurse and instead use formula, more specifically, Weston A. Price’s formula.

One problem with the WAPF coming out and stating that if a mother isn’t eating the perfect diet, then she shouldn’t nurse, IS THIS:  Unfortunately, due to societal influences, there are plenty of mothers who do not nurse simply because it is not convenient for them. Some women do not want to put in the effort, as nursing isn’t always easy. They’d rather sleep at night and have someone give a bottle, or they don’t want to be ‘tied’ to an infant if they have something else that they’d rather be doing.  Because formula is readily available and widely used, these mothers are led to believe that formula is just as, or almost as, good as breast milk. We, as a society, are just coming around to waking people up to see that formula comes no where near offering the nutrients of breast milk and that the reasons so often given by new mothers about why they aren’t nursing, aren’t good reasons at all.

The only part of the WAPF statement that these women are going to ‘hear’ is that they shouldn’t be nursing because they don’t eat a perfectly healthy diet. Most of these women, who weren’t so keen to nurse in the first place, are NOT going to make their own formula using the suggested recipe by WAPF, nor will they spend the money for any formula that may be sold by the foundation. They will go out and buy the mainstream cans of formula that contain chemicals and synthetic ‘nutrients’ – the exact formula that WAPF is saying shouldn’t be used even if a woman’s diet isn’t nutrient dense.

This sentiment, that a mother needs to have a perfect diet to nurse her children, only leaves society with confused and/or misinformed mothers and children who will not get the essential bonding time gotten from nursing, who will not build their maximum lung function, and who will not receive the nutrients that can ONLY be gotten from live mother’s milk.

The fact is that a mother produces the PERFECT milk for her babies, as designed by God or biology, whatever you believe. While I don’t suggest sitting around eating processed foods like Cheetos and soda all day, I do submit to the belief that the normal diet of the typical human offers more than a sufficient amount of nutrients for a baby. 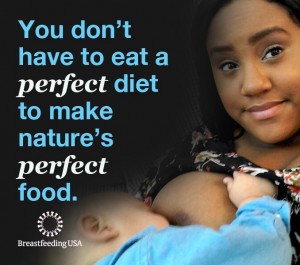 *** “Our interpretation is the following: the diet of modern American women is so appalling, and their preparation for successful breastfeeding so lacking, that their breast milk provides no better nourishment for their infants than factory-made formula.” – Weston A. Price Foundation