Recently my husband and I were debating over sleeping arrangements and laughing about how my daughter is 16 months and hasn’t spent one night in the beautiful and kind of expensive, Italian crafted crib (thanks mom and dad) that we’ve had set up. Don’t get me wrong – the crib did get some use. We got it before my first born, my son, came into the world, and during our run as first time parents, tried using it with him because we thought it was the right thing to do.

Now, as my husband disassembles the crib and rightfully grumbles about having had to set it up and take it down three times in the past three months (because I’ve wanted it moved from room to room in case I would one day use it), I tell him that if I knew then what I know now, we would have never gotten a crib and that if I could tell new parents one thing it would be to not spend the exuberant amount of money on a crib, or to at least wait a while after the baby is born. 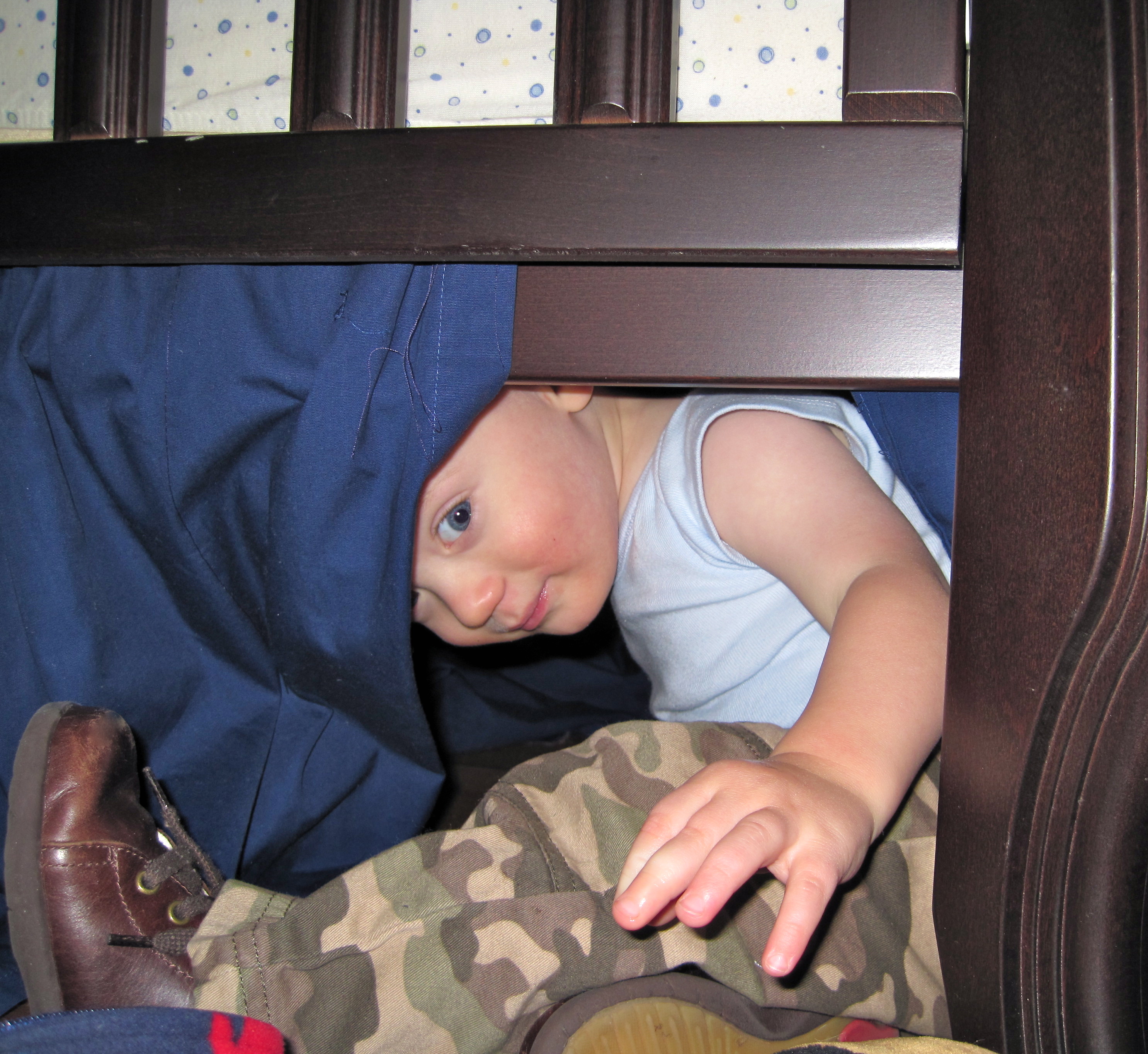 Our son used his crib as a place to hide under and play peek-a-boo from rather than sleep in!

I know this throws a wrench into people’s plans for what they want the nursery to look like and I understand, but when you’re on your second or third child, you’ll understand that function comes before aesthetics.

For us, not using a crib came about as a way to keep everyone happy; life is too short not to be! I nursed both of my children and since they needed to eat or wanted comfort during the night, I got a lot more sleep having them in the bed and rolling over to feed them, and they didn’t get jostled around from crib to chair and back to crib each time they awoke. Their feedings went faster and we were all peacefully asleep before ever really waking to begin with.

When I would tell people about my sleeping arrangements I would get mixed responses. Some people felt relieved to hear that they weren’t the only ones with babies/kids in their beds. Others felt I was creating a monster that would only get bigger with each night my child/children were in my bed. Some thought I was wrong all together, fearful it was harming my children in some way!

Co-Sleeping Reduces the Risk of SIDS

According to Silven and Schon, “societies or parts of societies in which mother–infant co-sleeping is widely practiced, generally have a relatively low incidence of SIDS compared to cultures that encourage solitary infant sleep. This is the case despite the fact that these people often live in suboptimal conditions, which would be expected to predispose them to increased infant mortality” (125).

Also, “The general hypothesis that co-sleeping (at least in the form of a committed caregiver’s proximity i.e. roomsharing) reduces SIDS among some SIDS prone infants is confirmed by studies showing that roomsharing in the presence of an active caregiver saves lives. This hypothesis emerged initially from considering the evolutionary function of mother– infant co-sleeping and breast feeding, both among human and non-human primates and the underlying physiological systems of the human infant, which are positively regulated by the contact that such proximity asserts. In addition, co-sleeping among non-smoking mothers is associated with remarkably low SIDS and infant mortality. These reports are confirmed by a recent worldwide childcare survey by the SIDS Global Task Force led by Nelson et al. This international survey team of over 20 scholars revealed that, compared with crib sleeping cultures, those cultures practising the highest co- sleeping and bedsharing rates experienced either the lowest SIDS rates of all”(McKenna and McDade 149).

“When social relationships in the child’s nexus is strong during the day and involves a lot of engagement and contact by reassuring parents, and this positive engagement is extended throughout the night, the child is getting more of that which is already good, therein further reinforcing such personality qualities as self comforting skills, confidence, self-worth, and social-cognitive engagement skills along with more positive emotional-empathic capacities altogether”(McKenna).

In fact, “The potential psychological and emotional benefits of co-sleeping for later adult life and among young children, are just now beginning to be published and have been summarized. Children who ‘never’ slept in their parents’ bed show a trend toward them being rated ‘harder to control,’ ‘less happy,’ less innovative and less able to be alone and in several studies they exhibit a greater number of tantrums. Children who were never permitted to bedshare were actually more fearful than children who always slept in their parents’ bed, for all of the night, a finding that is exactly the opposite of what is popularly understood”(McKenna & McDade). And according to Dr. Sears, “Co-sleeping babies grow up with a higher self-esteem, less anxiety, become independent sooner, are better behaved in school, and are more comfortable with affection. They also have less psychiatric problems.” 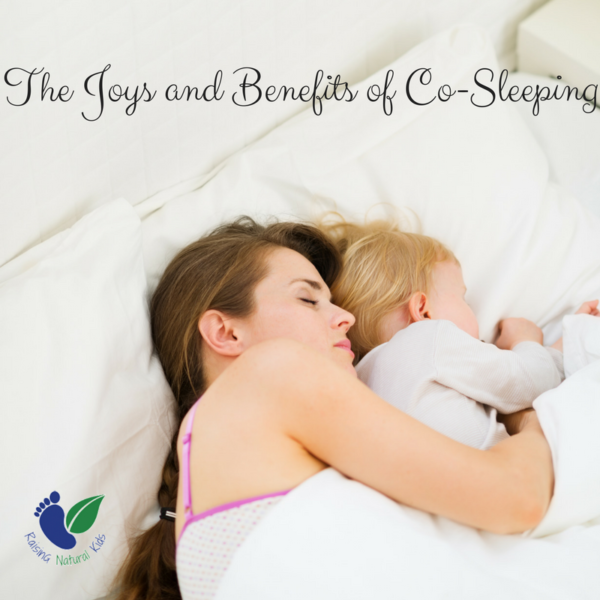 Parents Benefit from Co-Sleeping Too

When the baby is in the same bed everyone gets more sleep as no one actually has to get out of bed to attend to the infant’s needs through the night. And, interestingly enough, it helps to strengthen the relationship between parents and child, including fathers. “Helen Ball’s study of co-sleeping fathers in England, the only study of its kind, found that the dads in her sample were initially reluctant to bedshare, yet they ended up finding the experience overall “more enjoyable than disruptive.” She suggests that the intimate contact that dads can have with babies in bed with them helps them to develop, when they want to do so, an intense social relationship with their infants that might otherwise be delayed during breastfeeding. Dr. Ball suggests that “Triadic co-sleeping arrangements may serve to ameliorate this effect, and provide fathers who are motivated to do so the opportunity to experience intimate contact and prolonged close interaction with their newborn baby””(McKenna).

Co-Sleeping is The Preferred Method of Sleep Around the World

“Side-by-side mother–infant sleep, on the same surface appears to be the most common sleeping arrangement worldwide”(McKenna and McDade 143). According to James McKenna, “For the overwhelming majority of mothers and babies around the globe today, co-sleeping is an unquestioned practice. In much of southern Europe, Asia, Africa and Central and South America, mothers and babies routinely share sleep. In many cultures, co-sleeping is the norm until children are weaned, and some continue long after weaning. Japanese parents (or grandparents) often sleep in proximity with their children until they are teenagers, referring to this arrangement as a river – the mother is one bank, the father another, and the child sleeping between them is the water. Most of the present world cultures practice forms of co-sleeping and there are very few cultures in the world for which it would ever even be thought acceptable or desirable to have babies sleeping alone” (Natural Child Project).

When born, babies want to be in small spaces, like they were in the womb, as it is what they are familiar with and what makes them feel secure. Thus, in those first couple of months, a baby only needs a moses basket or a basinet type piece of furniture placed next to you to sleep in, if the baby isn’t sleeping with you in the bed already. After that, take time to figure out what works best for your family’s sleeping arrangements and then decide about whether or not you need a crib. Personally, my children didn’t end up in my bed until they were a month or 2 old, just because I was nervous that they were so tiny and I didn’t know a whole lot about the ins and outs of co-sleeping at the time. But, many people start from day one, knowing that they should not share a bed with a baby if under the influence of medication or alcohol, and to be mindful that no pillows or blankets are near the baby.

Babies grow into adults in the blink of an eye, or so we are told! I want to take advantage of any and all bonding time that I can get and give to my children be it day or night. These moments of getting to be right next to your children as they sleep are too precious to not savor.

McKenna, James and McDade, Thomas. Why babies should never sleep alone: A review of the co-sleeping controversy in relation to SIDS, bedsharing and breast feeding. Paediatric Respiratory Reviews. 2005. Web. January 24, 1022.

« Raising Kids Naturally Outside of the Traditional Model of Healthcare
Going More Natural at the Supermarket – The Next Step: Do Your Best to Avoid GMOs! »