Well, I did it. I officially became known by teachers as that ‘crazy’ mom and my son is only 3. Perhaps crazy is too strong a word, one that’s a bit overused these days. I prefer to think of myself as well informed, choosing to make sure my son eats only things that will benefit his overall well being, instead of making him susceptible to illness from toxic preservatives such as TBHQ.

I was at work one day when I first learned of it. I was pregnant and I had that cliché craving for ice cream. The only ice cream available in the school I teach at can be found in a vending machine in the cafeteria. After making my selection, I quickly devoured it without looking at the label because I already felt guilty enough about putting it into my body knowing it wasn’t healthy! Once it was gone though, I got curious and looked. It was then that I first saw the letters TBHQ, with the word antioxidant next to it in parenthesis, and I thought, if the makers have to say it’s an antioxidant, it certainly can’t be a natural one; so I looked it up. What I found made me wish I had never even taken one bite of it, especially since a fetus is what his/her mother eats!

So, when my son started preschool and the teachers were giving him school provided snacks, I figured I would just go with the flow. All I knew from Lee was that he was getting goldfish and crackers. Not my favorites, but it was only two days a week and it could be worse. It was when I volunteered to be the class mom for a day that I found out that the “crackers” were Cheez-Its. No big deal, right? WRONG.

Included on the list of ingredients is TBHQ, and when I saw it listed, I freaked. TBHQ is a form of petroleum (butane), and is used as a stabilizer in oil fields among other things. The FDA says that TBHQ must not exceed 0.02 percent of its oil and fat content. Death has occurred from the ingestion of as little as 5 grams (Winter). Ingestion of a single gram (a thirtieth of an ounce) has caused nausea, vomiting, ringing in the ears, delirium, a sense of suffocation, and collapse (Winter). Thus, this is not something I want my children eating. 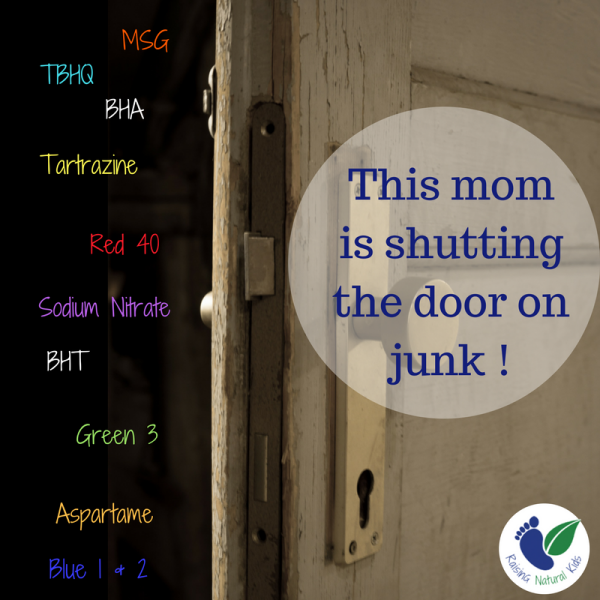 The next time I took Lee to school, I asked the teachers not to give him any food containing TBHQ or artificial food dyes. I provided them with the same information about TBHQ that I stated in the previous paragraph. I was met with a question that, sadly, I think many other people might also ask,

“well, how many grams of TBHQ is in Cheez-Its anyway?”

There is no percentage or numbers on the box and I didn’t say it, but I was thinking, “why on earth would anyone put it in their body, much less the body of a three-year-old after learning that it can be deadly?” and “So putting even .02 grams into his body is ok, because he won’t die from that?” The teachers then asked me to go through the ingredient list of everything else they sometimes give the kids: Items such as Oreos and Teddy Grahams.

The look on my face must have shown my dissatisfaction with these foods being given to the kids, if not for the sugar content alone. I was also shocked because almost all of the snacks on their list contain TBHQ; I don’t buy those foods for my family, so I had no idea that it is in so many products targeted at kids.

Why Are Parents Buying Food Products with TBHQ in Them?

Unfortunately, so many parents don’t know that the majority of the non-organic, mainstream snack foods contain harmful chemicals such as cancer-causing food dyes and TBHQ. I often feel like people’s first response to this is, ‘well it’s FDA approved and on the shelves so it can’t be that bad.’ BUT the FDA’s first interest is NOT you or your child, it’s money and politics.

Just look at cigarettes. Back in the day, no one thought them to be a health detriment, yet look how many people have died from the effects of smoking. (I don’t know how many grams of tobacco it takes to kill a person, but we do know that inhaling the approximately 0.7 grams in one cigarette per hour or per day, does kill people over a period of time!)

People believe that if these snacks and cereals are on the shelves and other parents are feeding them to their kids, then they must be ok. Because parents often do not see their child reacting to the chemicals in the products right away, they think that their child can tolerate them and they must not be a problem. But, some of these additives take years of accumulation to create a problem – quite like tobacco buildup causing cancer!

I am well aware that Lee’s school isn’t the only one feeding kids these types of foods. I know that even the local YMCA provides snacks like these, and worse. I just can’t fathom not changing what kids are fed after doing just a little research, or even after reading an article like this and seeing the possible long-term effects these foods can have. After all, don’t we owe our kids, who can’t yet make educated choices about food for themselves, the best possible foundation to healthy eating and, thus, a healthy lifestyle? When you know better, you can do better. So go ahead, help your family make wiser food choices now that you know!

You have a voice and you have a choice:  Choose healthy snacks for your kids and insist that their school and daycares do too!

7 Other Chemicals In Your Food (CNN)

If you find this post useful please share it with others so that they are aware of the dangers of TBHQ and other food additives. Thank you!

And Join Our Closed FB Group where other moms like you are discussing the topic.

« If Formaldehyde is used on Dead Bodies, Why is it in My Baby Products?
Ditch the Can This Year – Homemade Cranberry Sauce »