Twas the night before Christmas, when all through the land , only Amani was stirring,

eating organic grapes in her house.  The stockings were hung by the chimney with care,  In hopes that St Nicholas soon would be there.

Liam was nestled all snug in his organic bed,  While visions of pumpkins danced in

Liam sleeping on his organic mattress!

Magnolia’s head.  And mamma in her ‘kerchief, and I in my cap,  Had just settled our

Magnolia in the Pumpkin Patch

brains for a long winter’s nap.

When out on the lawn there arose such a clatter,  That Gavin got out of his bath to see

Gavin in his bath with Lavender oil!

what was the matter.  Away to the window Leighton flew like a flash,  Tore open the

shutters after wiping off her green, organic mask (peas!).

The moon on the breast of the new-fallen snow  gave the lustre of mid-day to objects below.  When, what to Livia’s nursing eyes should appear,  But a miniature sleigh, and eight tiny reindeer. 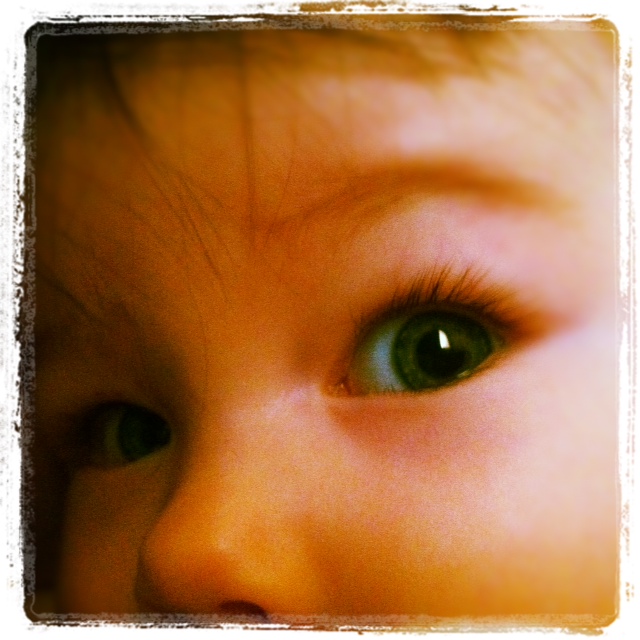 With a little old driver, so lively and quick,  Paxton knew in a moment it must be St Nick.  More rapid than eagles his coursers they came,  And he whistled, and shouted, and called them by name!

Paxton in a cloth diaper with an amber teething necklace!

As dry leaves that before the wild hurricane fly,  When they meet with an obstacle, mount to the sky.  So up to the house-top the coursers they flew,  With the sleigh full of Toys, and St Nicholas too.

And then, as Judah played in the garden, he heard on the roof  The prancing and pawing

Judah in his organic garden!

of each little hoof.  As Brandon drew in his head, and was turning around,  Down the

Brandon in the Leaves

He was dressed all in fur, from his head to his foot,  And his clothes were all tarnished with ashes and soot.  A bundle of Toys he had flung on his back,  And he looked like a peddler, just opening his pack.

His eyes, like Arabella’s -how they twinkled! his dimples how merry! His cheeks were

like roses, his nose like a cherry!  His droll little mouth was drawn up like a bow,  And the beard of his chin was as white as the snow.

The stump of a pipe he held tight in his teeth,  And the smoke it encircled his head like a wreath.  He had a broad face and a little round belly, like Finian’s,  That shook when he

Finian in his cloth diaper with his teething necklace!

He was chubby and plump, a right jolly old elf,  And after swallowing some broccoli, Lila laughed when she saw him, in spite of herself

!  A wink of his eye and a twist of his head,  Soon gave Adalyn to know she had nothing to dread.

Adalyn in her Bath!

He spoke not a word, but went straight to his work,  And filled all the stockings, then turned with a jerk.  And laying his finger aside of his nose, And giving a nod, up the chimney he rose!

He sprang to his sleigh, to his team gave a whistle,  And away they all flew like the down of a thistle. But I heard him exclaim, ‘ere he drove out of sight, ”Happy Christmas to all, and to all a good-night!”

Thank you to everyone who shared their natural kids with us! Have a happy holiday and a blessed New Year!

« Green Toys, Safe Toys and Toys Made Close to Home
Parents Buy Car Seats to Keep Their Children Safe, Yet Oftentimes Danger is Still There! »