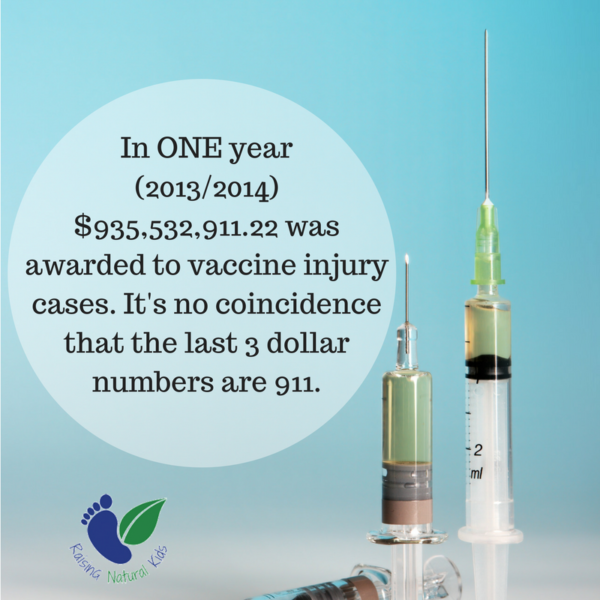 Here’s the official Annual Report of Claims, in a letter from the United States Court of Federal Claims, to Joseph, R. Biden, Jr. (then President of the United States Senate). 151 pages of cases bought to court in just ONE year. MOST of them being vaccine injury related. NOTE just two years later, the latest version of the document for 2015/1016 is 277 pages long, accounting for 126 more pages of vaccine injury claims. The dollar demand total for this most current year was just under 1 TRILLION – 995,275,774,000.00 to be exact.

Taxpayers Pay for the Pharmaceutical Companies’ Negligences and Damages

Note, that due to a law passed in 1986 under President Reagan, this money, over 900 million dollars, comes from the taxpayers, and not from vaccine makers who caused the injury. According the the New York Times, “Mr. Reagan said he had approved the bill ”with mixed feelings” because he had ”serious reservations” about the vaccine compensation program.

But he warmly endorsed provisions of the bill that would, for the first time, allow pharmaceutical companies to export drugs to other countries that have approved their use, without waiting for the United States to approve the drugs’ sale here. Mr. Reagan said this part of the new law ”will increase the competitiveness of the American pharmaceutical industry abroad, create jobs, foster biotechnology and aid other nations.” Separation-of-Powers Issue”(NY Times).

“The Justice Department had urged a veto of the bill because of its objections to the new system of compensating people injured by vaccines. But Vice President Bush, Commerce Secretary Malcolm Baldrige and Dr. Otis R. Bowen, Secretary of Health and Human Services, urged Mr. Reagan to sign it, as did James A. Baker 3d, Secretary of the Treasury.” When signing it, President Reagan said that he hoped that congress would “make ”corrective” changes in the framework of the vaccine program to address his objections”(NY Times). Those changes were never made, not then, and not in the last 31 years since the bill was passed.

Annual Report of the United States Court of Federal Claims