In today’s world, it is so important for women to educate other women and men when it comes to breastfeeding. Our babies are too important not to! When I first read this post, written by Kate, over at Kate Surfs, I knew it had to be shared wide and far.

“Every time I call my grandmother, she asks me the same question, “Are you still breastfeeding… maybe it’s time you stop.” Now, I love my grandmother. She raised four kids of her own and she was/is an awesome mother.  But, breastfeeding is not something that she did. It’s not that she COULDN’T breastfeed her babies.  It’s that she was told that she SHOULDN’T breastfeed her babies. Women of my grandmother’s era were told that ‘breastfeeding was not a scientific way to feed a baby‘. They were given ‘dry up‘ medicine in the hospital (after a completely drugged and unconscious forceps birth). It’s what you were told to do back then in America. You listened to your doctor, because the doctor knew best… Sigh… 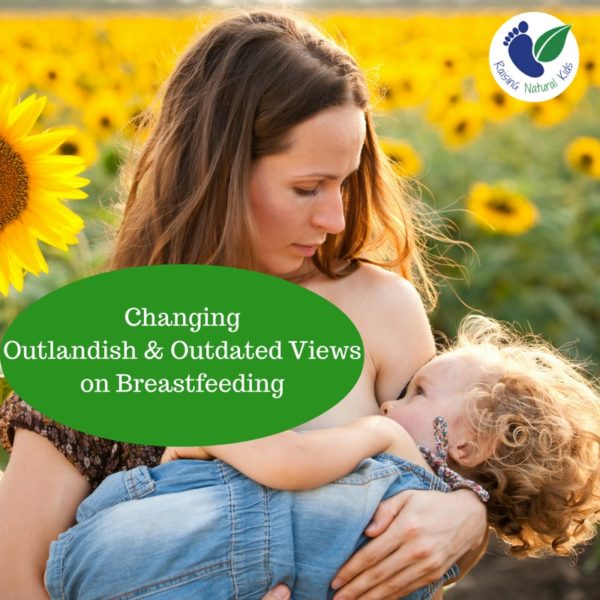 Well, luckily, in today’s world, we know that breastfeeding IS the best way to nourish a baby. But, women need a strong ring of support and a healthy breastfeeding-friendly society to make it happen easily. I understand that there are obstacles that can pop up for women who are breastfeeding and we are lucky to have bottles and formula available. But, breastfeeding rates today are unacceptably low around the world and there are a few major reasons I think why.”

Lack of Support and Lack of Role Models

I had NO CLUE how to breastfeed my first daughter when she was born. Sure, I had read all the books, but I hadn’t witnessed a baby being breastfed since I had last seen my own mother breastfeed my brothers, some eighteen or twenty  years before. My husband has this hilarious video of us on our first breastfeeding attempt as I fumbled along (hilarious now because I can say that I was successfully able to breastfeed).

Not so hilarious, was my friend’s experience. Her nipples were so severely damaged during that ‘first feed‘ because she didn’t receive the right help when her baby first went to latch on. She ended up injuring her poor nipples enough that only through perseverance of pumping for three months afterwards was she finally able to feed her baby directly from the breast.

And, have you heard of the captive gorilla who did not know how to breastfeed her baby until she was shown how to do it by the mothers of La Leche League (read someone’s take on the story here)? Mothers need to see other mothers breastfeeding to know how it all works.

We Have Lost Our Village

Women need to be with other women. Way back, when life was simple, breastfeeding was simpler! We didn’t have to do a million and one things on our own. We had sisters and cousins and aunties and grandmas to help cook, clean, tend to other children, etc. We could take naps while a family member played with the baby. Now a days, we live in relative isolation from our help.  We’re expected to hold our heads high and ‘do it all‘.  Often, we feel that we have nobody to talk to and nobody who can relate to what we’re going through.  In the beginning, with a new baby, breastfeeding can seem exhausting, stressful and frustrating at times. With little or no support, breastfeeding is often is the first thing to go for mothers trying to do their best to hold their heads above water.

Some baby books out there are good. Some are terrible. And, many are flat out confusing to new mothers. Any book that puts you and your baby on a strict feeding schedule is bound to cause a headache (for you and your baby). Any book that tells you your baby is trying to manipulate you, needs to be thrown in the gutter. Any book that makes you think that you don’t know what is best for your baby, is garbage. My favorite baby book, very comprehensive and scientifically backed is Sarah Buckly’s ‘Gentle Birth Gentle Mothering’.

For thousands of years, if you were royalty or very wealthy,  you would not have acted like a ‘cow’ and breastfed your baby. You would have left the job to a hired wet nurse (another lactating mother), she also did all the ‘dirty’ baby work. (Not all wet nurses fed wealthy babies, some wet nurses were sisters, cousins and aunties who were feeding babies because the mother was unable to). Sometime around the turn of the 20th century, formula became readily available. Women who were in the middle class wanted to be cool like the rich aristocrats and so they started feeding their babies formula. In its early days of its availability in stores, buying formula was a bit of a status symbol. (Check out this interesting research article, A History of Infant Feeding)

After the birth of my daughter, I was waiting around for my milk to come in (as you do). I experienced all different kinds of midwives who helped me getting started with breastfeeding. Some were awesome! Others were treating my breastfeeding like it was a medical emergency. I kid you not, one midwife was so frantic that my daughter was not getting enough milk, that she started hand expressing colostrum from MY NIPPLE and feeding my newborn with a syringe!

But, my baby was fine! She was loosing the ordinary weight that a newborn does. My baby was alert and having bowel movements… Yet, this nurse felt the need to freak me out and make me feel like something was wrong! My later understanding of the situation was that this midwife, was very uncomfortable and un-knowledgable about breastfeeding in the first place. Many doctors are also not knowledgeable about breastfeeding. They often give advice which confuses and upsets new mothers.

America’s Strange Hang Up on the Body

I live in Australia and frequently breastfeed in public without thinking twice about it. I let my kids run around on the beach naked.  I’m pretty sure if I ever went home to visit America, I would be in big trouble for indecent exposure or something. After traveling the world, I now fully understand that Americans have a surprisingly conservative view on the body. I’m not sure I understand it, as (excuse my language) but tits and ass are plastered all over the American media… yet somehow, breastfeeding is considered ‘gross‘. Of course, other cultures in the world certainly have their own strange body hang ups, but, unfortunately, America has Hollywood. The TV, movie and advertising industry influences creep its way into every corner of the globe. So, whatever goes on in American culture, in some capacity, gets absorbed by the rest of the world. 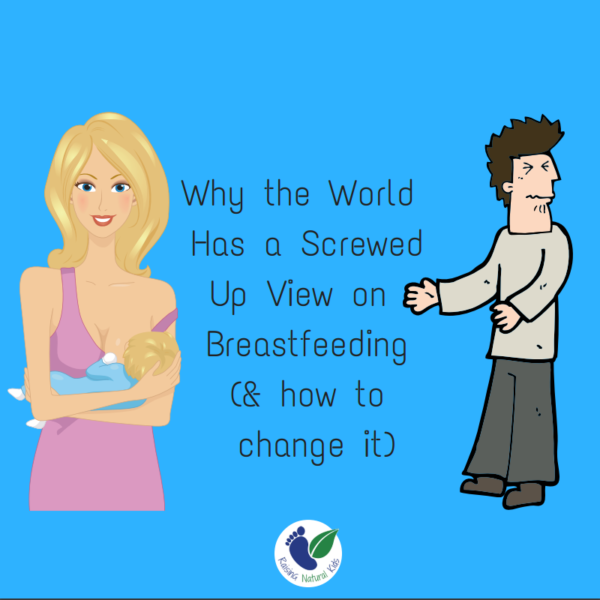 The Feminist Movement that Backfired on Women

Equal pay.  Equal rights in the workforce and more. I am all for it. But what did the feminist movement do for breastfeeding and for woman who have just had a baby?  Depending on where you live in the world, you may not be getting screwed over by the feminist movement. If you’re ‘fortunate’ (or unfortunate depending how you look at it) enough to live in the USA, you’re looking at SIX WEEKS OF PAID MATERNITY LEAVE and twelve weeks if you’re damn lucky. SIX. WEEKS.  SIX WEEKS?!?!

At six weeks postpartum, if I do recall correctly, I was completely incompetent to do anything other than gaze lovingly into the eyes of my baby.  I rarely made it out of my pajamas and I could barely hold a conversation with anyone. The thought of having to get dressed, leave my baby without a boob in sight, and muster up enough strength to go to work, was seriously enough to make me cry. Believe me, I thought about my friends in America who had to do it, and it MADE ME CRY.  How can a six week postpartum women even be good for business productivity?! Most American women don’t have a choice. If they don’t go to work, they will have absolutely no income, will loose their health insurance and will not have a job to go back to when the time comes. Maternity laws in some countries are pretty good.. while in others, they really need to change!

A bit on the spiritual side.  Collective consciousness, as in how the world moves… or like, how the whole world thinks… can make a big impact. The ripple effect, if you want to call it that. We’re all made up of energy and we’re all connected. It’s not a big secret that the attitude of the world impacts us in a huge way.  So, if the attitude of everyone around you is saying that you should be second guessing your intuition and your primal instincts to respond to your child by breastfeeding… well guess what starts to happen???  Women start second guessing their ability to trust their gut.  They start questioning their ability to breastfeed and they start finding flaws with what they’re doing.

Things We Can Do to Change These Views

Above all, remember that you are the most important person in your baby’s life. If you don’t respond to their needs, nobody else will.  Of course, you might want to live within the realms of what is acceptable in society, but don’t let years of social stigmata dampen down what you feel is the right thing to do for your baby. Connect with other like-minded mothers and form your own village! Be strong and stand up for what you feel is right.

About the Author: Kate is an American living in Australia with her husband and two young children. She holds a Masters of Educational Practice and is a high school science teacher by profession, but mostly she stays at home with her children. She is a yoga and meditation teacher, trained through the Art of Living Foundation, a surfer, a vegetarian, and healthy conscious. She is an Aware Parenting Instructor, as well as a Know Your Child Teacher. 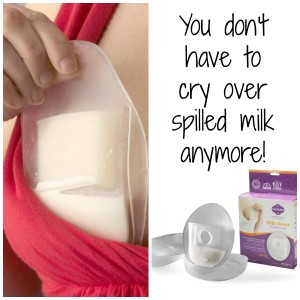 There is one thing I do know for certain when it comes to nursing. Some mothers (me) do cry over spilled breastmilk, especially a mother who doesn’t make so much (as happened with my first child). Had I had this milk-saver, I would have cried a lot less – check it out!

Do you know someone just starting on her breastfeeding journey? Here’s some great tips to share: Breastfeeding Tips for Mamas.
After finding myself recommending the products I use in my own home over and over again, I joined Amazon affiliates in order to make a small percentage on the items I share.  Any monies earned help me to run and maintain this blog.

« Mindful Parenting At Trying Times
How to Heal Eczema for Good »